Last weekend, we decided that the new lumber we used for our front porch project was finally ready to stain. Like I mentioned before, it’s really important to let the wood fully dry out to avoid any issues (like sealing in moisture, bubbling/cracked finished, etc). The last time I showed our porch, it looked like this: 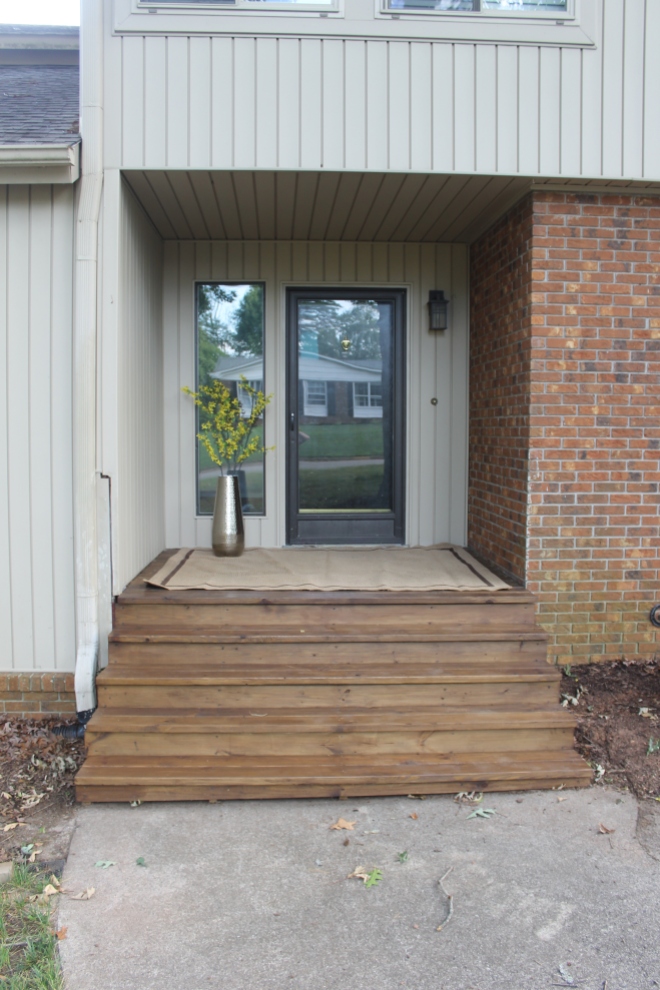 After we sanded down the porch and built new stairs, all we needed to do was stain and seal everything. We had some unusually gorgeous weather the weekend we started on the staining which was nice because it meant we weren’t drenched in sweat by the end of it. We started on a Sunday evening and I showed this sneak peak on Instagram: We decided to go with an all-in-one product so that we didn’t have to worry about getting several coats done in between those lovely Southern Summer pop-up storms. We ended up using BEHR Transparent Weatherproofing Wood Finish in Cordovan applied with whatever paint brushes we could find that weren’t completely hardened. We tried using a roller but couldn’t quite get it to apply thin enough and didn’t like the way it was turning out.  First, we used Behr All-In-One Wood Cleaner – the directions on the stain suggested using this first and we still had a whole bottle left over from our failed stripping attempt. Since most of the wood was new, there wasn’t much dirt to clean off but we figured better safe than sorry. According to the stain directions, you can apply your second coat 1-2 hours after the first, but because we started so late in the day we were only able to get the first coat done. While we were working on the first coat, the president of the Homeowner’s Association and his wife just happened to be strolling by. Now, I’m not much of a rule breaker but let’s just say that we are technically supposed to get approval for anything we do to the front of the house and technically we didn’t even ask. Of course when he introduced himself my first thought was “Oh poop” or maybe it was something slightly less appropriate to say in public/to an audience. Luckily for us, it doesn’t seem like that rule is all that strict because the only thing he said about the porch was how nice it looked. Phew. By the end of the night, our porch was looking just a little more welcoming. Look, there’s even a stray flip flop for your pleasure.

When we went out to do that second coat the next day, we noticed that the finish on the new wood was a little lighter than the old which makes sense since the old wood started darker. We decided to just do a second coat on the newer wood and it ended up drying to match the older stuff. We’ll probably always keep a rug on the porch which will cover most of the older lumber anyway. The directions say to allow 72 hours to completely cure but ours was still a little tacky around then so we waited an extra day before adding anything back. After a lot of time (which was mostly just procrastination) and a little labor our porch looks like this: 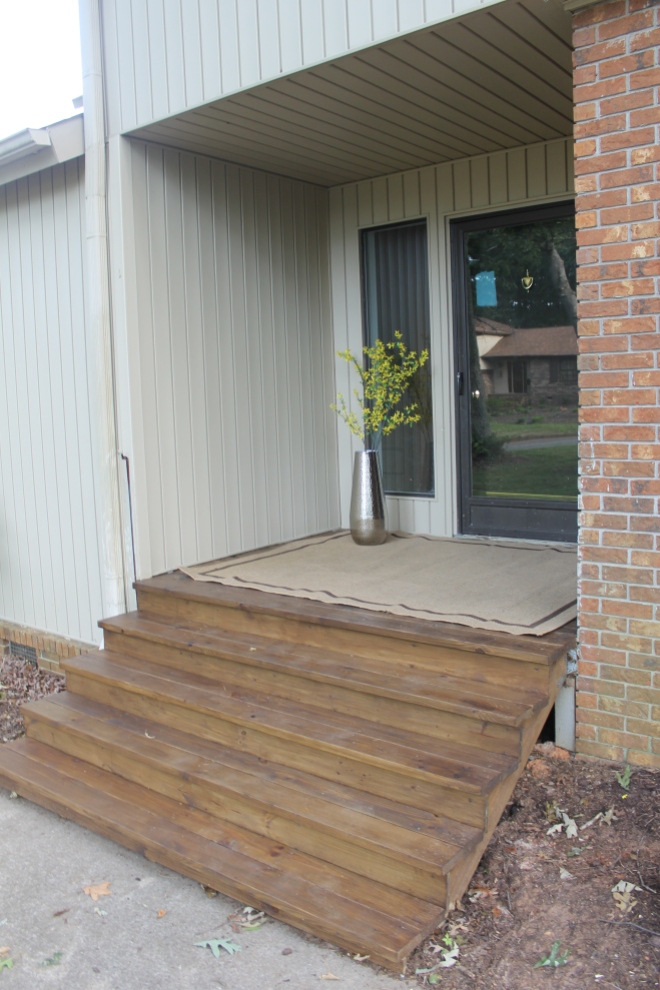 Which is a lot prettier than this: We still need to mulch those beds but that’ll happen later this fall, most likely. We had originally said that after we stained the porch we would call the project done but since then, we’ve decided to add hand rails back. We have a design in mind and we may be able to get the first part done before we leave for our trip but we’re not sure. Hopefully we can at least pick up the lumber this weekend and let it start drying out. So much progress! I like it.