Yep, I suck. I’ve been insanely busy at work lately and once I got home Friday night I just completely forgot to post. I planned on doing a post on Saturday instead but never got around to it. I didn’t want to skip completely so I’m doing my Friday Five post today and pretending it’s not Monday.

2 – This big guy surprised us when we got back from the dump on Saturday. Typically, I hate snakes but we leave these guys alone and let them do their job. This is only the second one we’ve seen this year and he looks like he’s eating well.

3 – We bought a new couch! In the last Friday Five post, I mentioned a new couch wasn’t really in our budget but we were able to shift some funds around and buy one that was on sale at Rooms to Go. We tried out the tufted sofa I mentioned but ultimately chose the Bonita Springs sofa because it was $300 cheaper and a little comfier. I’m a little concerned about the fabric with all of the animals but we really just need it to last a few years until we can upgrade.

4 – The couch was delivered this morning and we took the opportunity to completely rearrange the rest of our furniture. We swapped the sofa and tv walls and brought the two chairs from the study into the living room. We decided to keep the old sectional for now to fill up the other room. It’s too big for the space but it’s just temporary until we figure out what we want to put in there. We still need a rug for the living room and we’d like either a bench or a chaise to put under the window instead of the chairs but I’m just happy that it actually looks like people live here now.

5 – I was browsing Pinterest yesterday and this photo caught my eye (it wasn’t pinned properly so I have no idea who to credit. If anyone happens to know, let me know and I’ll update the post) 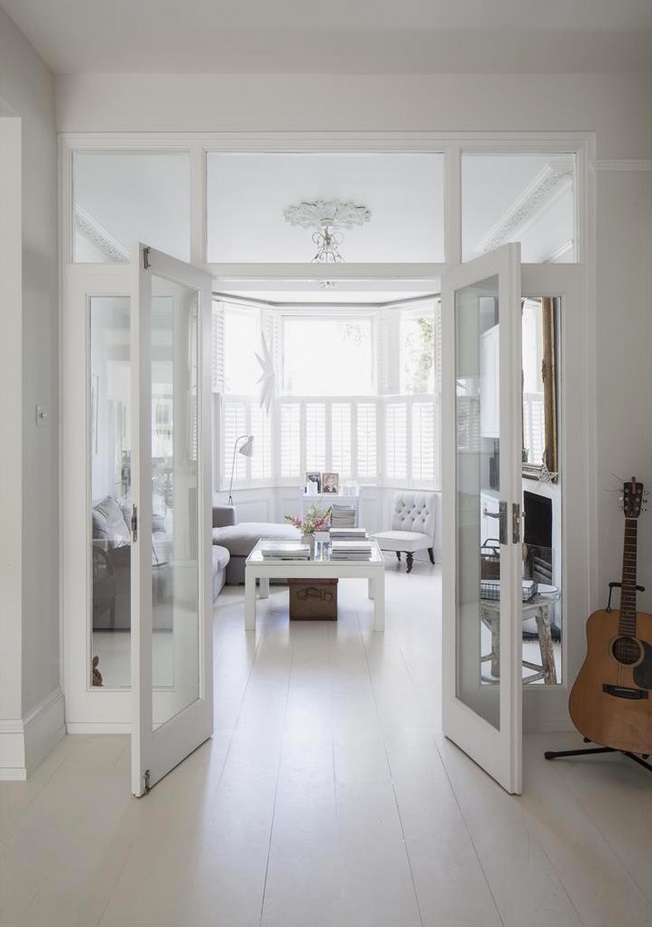 I would love to do something like this on both sides of our living room. I think it would look really pretty and I love how the glass keeps everything open but you can still close the room off. That’s also a lot of glass to clean dog slobber off of though so we’ll see.

It’s going to be another long and very busy work week but I’m hoping to find the motivation to give you guys an update on the deck later this week. Spoiler alert: it’s still not done but it’s getting so close! We need to install three more posts for the railings and then we can finish off the deck boards. After that it’s just installing the railings and putting in some stairs. So. Freaking. Close.