With the closet wrapped up, we were finally able to move on to Phase One of our fence project. Almost a year and a half ago, we threw together a very cheap fence in anticipation of adopting a second pup. Taking one 60lb pittie out on a leash is hard enough, trying to take two out every time they needed to pee just wasn’t going to happen. We bought several 4×8 sheets of lattice as well as a bunch of 4×4 posts and post anchors. We opted for the anchors because we knew the location of the fence was temporary so we didn’t want to set anything in concrete.

Here is what a very cheap fence looks like: 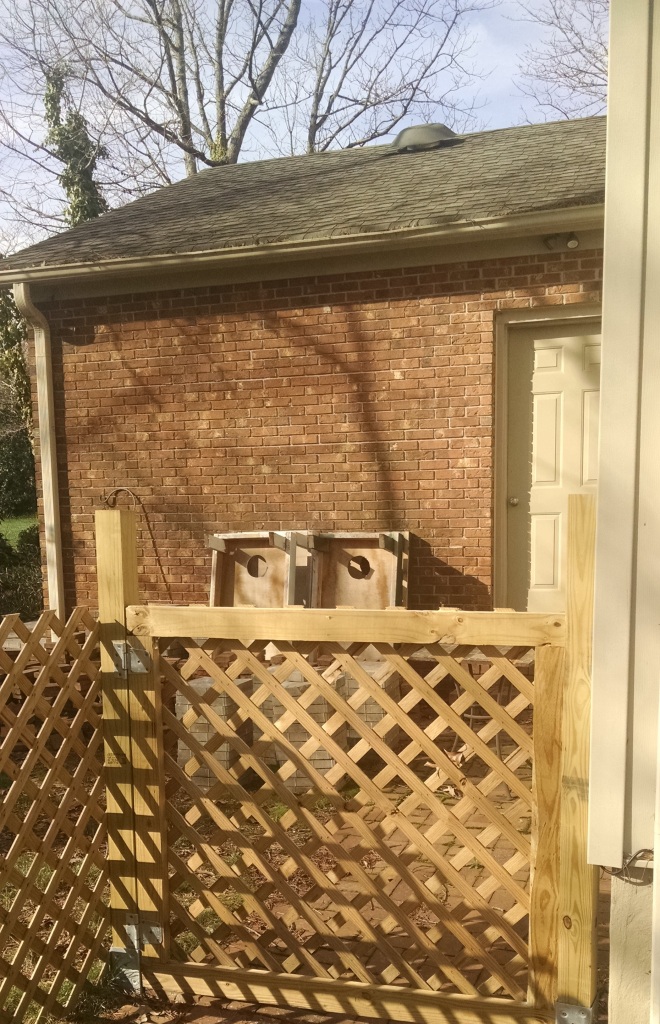 Not the prettiest or sturdiest thing in the world but it was functional so we didn’t have a new fence at the top of our priority list. Now that we’re closing in on being able to overhaul our existing deck, it’s time to revisit the fence. We are only putting in one side of the permanent fence right now. This is 100% a budget thing because we just can’t afford to do an entire fence plus a brand new deck and the deck has to be done in order to do the kitchen. Both the kitchen and deck are a much higher priority than a full size fence. If you’re new here, you may be wondering why we’re even bothering with doing one side right now which is a totally valid question. Not only are we tearing down the existing deck, but the one we’re putting in its place is going to be about twice the size. The current crappy fence is right where the stairs from the deck to the yard need to go so it needs to be moved.

Anywho, we started planning out the design of our fence forever ago and at the time, we settled on this:

I love horizontal fences and I think the style fits with our house and I liked that this design had a little variation at the top. Once we got ready to actually start on the fence though, we decided it would be much easier to just keep the same size boards all the way from bottom to top. Not only is it easier for us, but our backyard isn’t flat so we’re having to terrace the fence which looks a lot less weird when all of the boards are the same size.

Our plan is to build this one side of the fence and then connect the existing area to the new area. This time, we’re setting the posts in concrete so everything is a bit more involved but somehow it’s still easier than trying to get those freaking anchors in the ground. We’re also clearing out a couple of trees to make it a bit more open for the pups (and maybe one day small humans) to run around.

We’ve made a lot of progress on the fence and we’re down to the last 3 or 4 boards that need to get installed before we connect the two areas. Unfortunately for us, the weather is being a real witch right now and I’m not sure when we’ll get another dry day to finish. We’ve also got to let the wood dry out for a few weeks before we can stain it; fingers crossed we can get it done before it gets too cold or else we’ll have to wait until Spring!

Here’s a little peek at how things are going:

Most of our fence will be about 5ft tall but we decided to integrate a couple of taller privacy panels which are those two taller sections you see in the picture. Eventually, that’s where our outdoor furniture will go so we thought it would be nice to block out the fence our neighbor has around her deck. Oh and if you’re curious, the plan was not to bump the fence in like that but we ran into a little bit of an issue. When we were digging for the next post after the privacy section, we came across some PVC. We’re thinking it’s a sprinkler line since we called 811 to come spray for utilities and there was nothing in that area. Not a huge deal, we just ended up having to bump toward the house 2ft.

We don’t have much more we have to do for Phase One so hopefully the rain will clear at some point and we can finish up. Or maybe the rain will never stop and we’ll use our fence lumber to build an ark instead.

« Turning a Builder Basic Bathroom Mirror into a Leaning Floor Mirror
Do You Want to Build a Fence? Part Two »